A few Sundays ago, one of my favorite days of the entire year arrived. For the past fifteen years, I have competed in the Utica Boilermaker 15K, always held on the second Sunday of July, and since 2006, I have finished in under an hour. That means this year would be my tenth straight sub-60 clocking, if I could manage it. The record for most consecutive sub-one-hour Boilermakers is held by Paul Humphrey, with whom I had the pleasure of training when I lived in Utica. He ended his streak in 2012 after 23 straight performances under 60 minutes.

I obviously have a ways to go, but I’m taking it one year at a time. Typically, breaking an hour isn’t that difficult of a task for me, provided I am at least in decent shape, but this year I was a little nervous. My hamstring is still not fully recovered, and my training has been spotty over the past few months. My most recent race performance, a 5K in 18:43, converted to a 59:43 according to Jack Daniels’ VDOT charts. Granted, I deliberately started out conservatively in the 5K to assess the hamstring, but it still was no jog in the park. With the heat, hills, and hellish humidity that are the hallmarks of the Boilermaker, I knew I couldn’t take any chances.

I threw down a handful of 40-mile weeks leading up the race (still less than half of what I was doing earlier this year) and luckily my hamstring held up. On race day, I woke up at 3:15am to pick up Dan Sackett and Linsday Rynders to drive them out to Utica; this was the first time since moving out that I did not stay at my parents’ house the night before. I saw a few friends and got a few warmup miles in and then it was go time!

As always, I executed my tried-and-true Boilermaker strategy: first four miles conservative, open it up down the hill, and keep that momentum going through the finish. I planned on running 6:30 pace through four miles, and I did just that; splitting 24:02 at the top of the hill in the golf course. From there, I ran a few sub-6:00 miles, but deliberately did not go full throttle in case my hamstring was not up to the task. The downhill at mile seven tried to shred my quads, but I shortened my stride and focused on staying within my fitness. As I approached mile nine, I could tell that while I had not taxed myself aerobically, my legs were another story. Luckily, I had enough of a cushion that I could stay controlled to the finish. My competitive side did rear its head as I got closer, however, and I found myself trying to outkick the other runners near me. I crossed the line with a gun time of 58:09, or 6:15 average pace for the whole 15K.

So the streak continues! Only thirteen more performances like that and I will tie Paul’s record. However, after the race, I spoke with Mike Brych, who had just run his seventeenth sub-hour Boilermaker. With any luck, he will extend his streak past 23, and give me an even more challenging goal (as if 23 wasn’t tough enough!). But for now, I’m happy to have one more year in the books and be one year closer to the record. 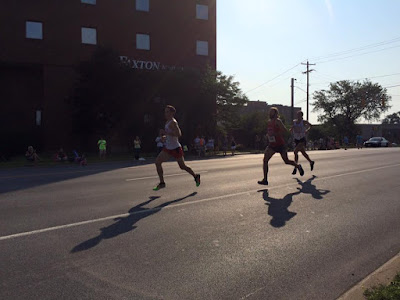 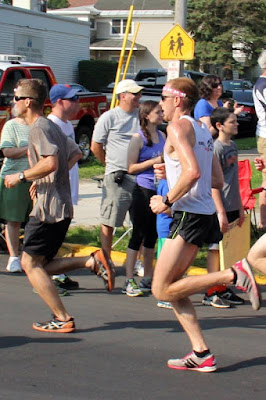