Published by Matthew Roberts on April 6, 2014

In my last review, I discussed the Adidas AdiZero Takumi Sen, which, though pricey, feel great and helped me along to my 2:39 finish at Grandma’s Marathon in 2013. Today, I will be reviewing another pricey Adidas racing flat: the AdiZero Adios Boost. You may have heard about Adidas’ new Boost technology, which utilizes a different kind of midsole foam that is alleged to return more energy than traditional EVA, and also last much longer while being more resistant to temperature changes. I was given these shoes by my friend Josh, who had bought them but felt some knee pain while wearing them.  Luckily for me, I am able to run in them without any issues. 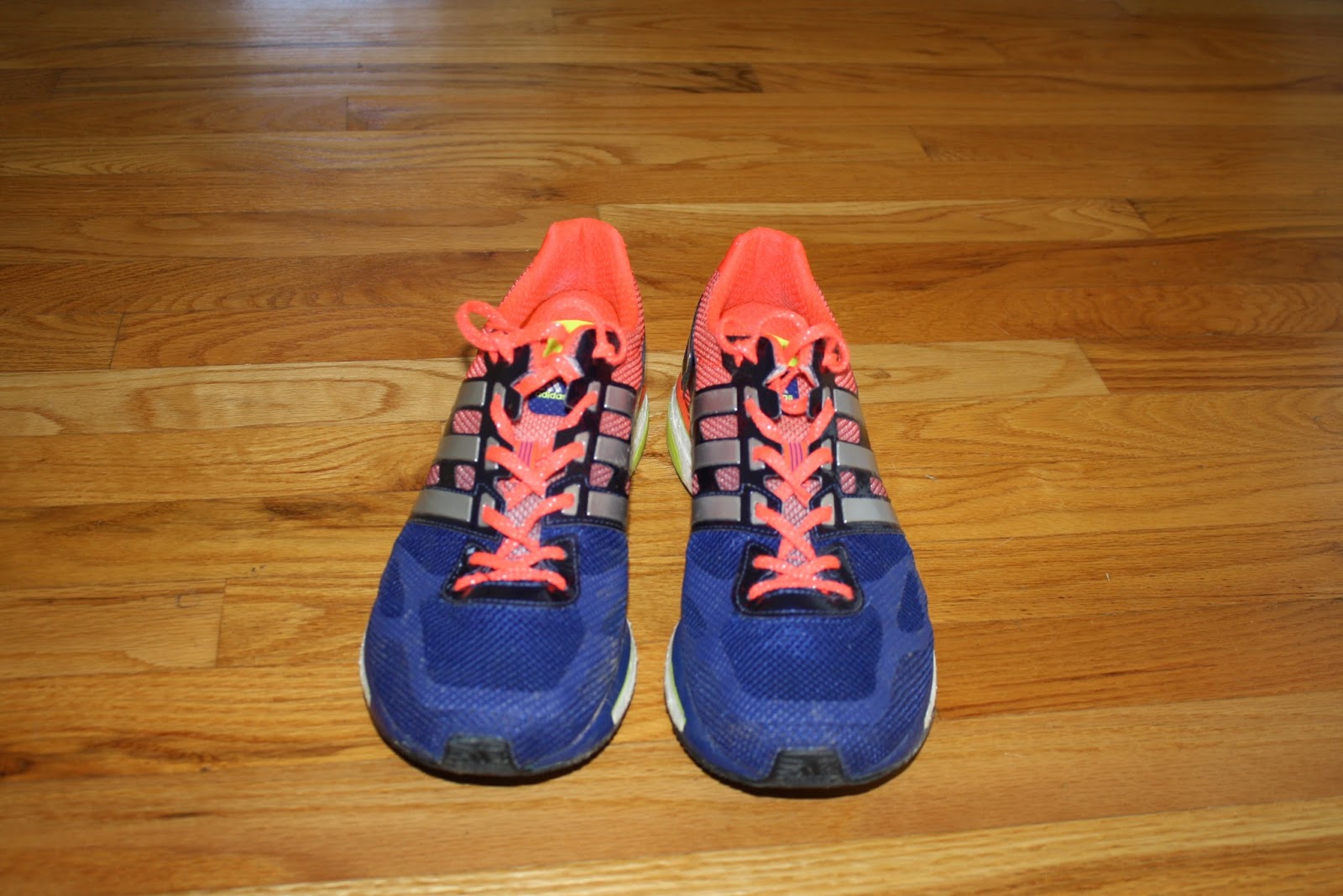 Upon first slipping my feet into shoes, I noticed that the forefoot is slightly wider than a typical Adidas racing flat.  My toes had a bit more wiggle room, and although I’ve never had a problem with the forefoot being too narrow, I did appreciate the more spacious toebox. The upper material feels bit thicker and softer than the Takumi Sens, and The Adios Boosts do feel a bit heavier (6.1 ounces compared to 8.0 ounces). The laces feel very secure, especially using the lace lock technique. 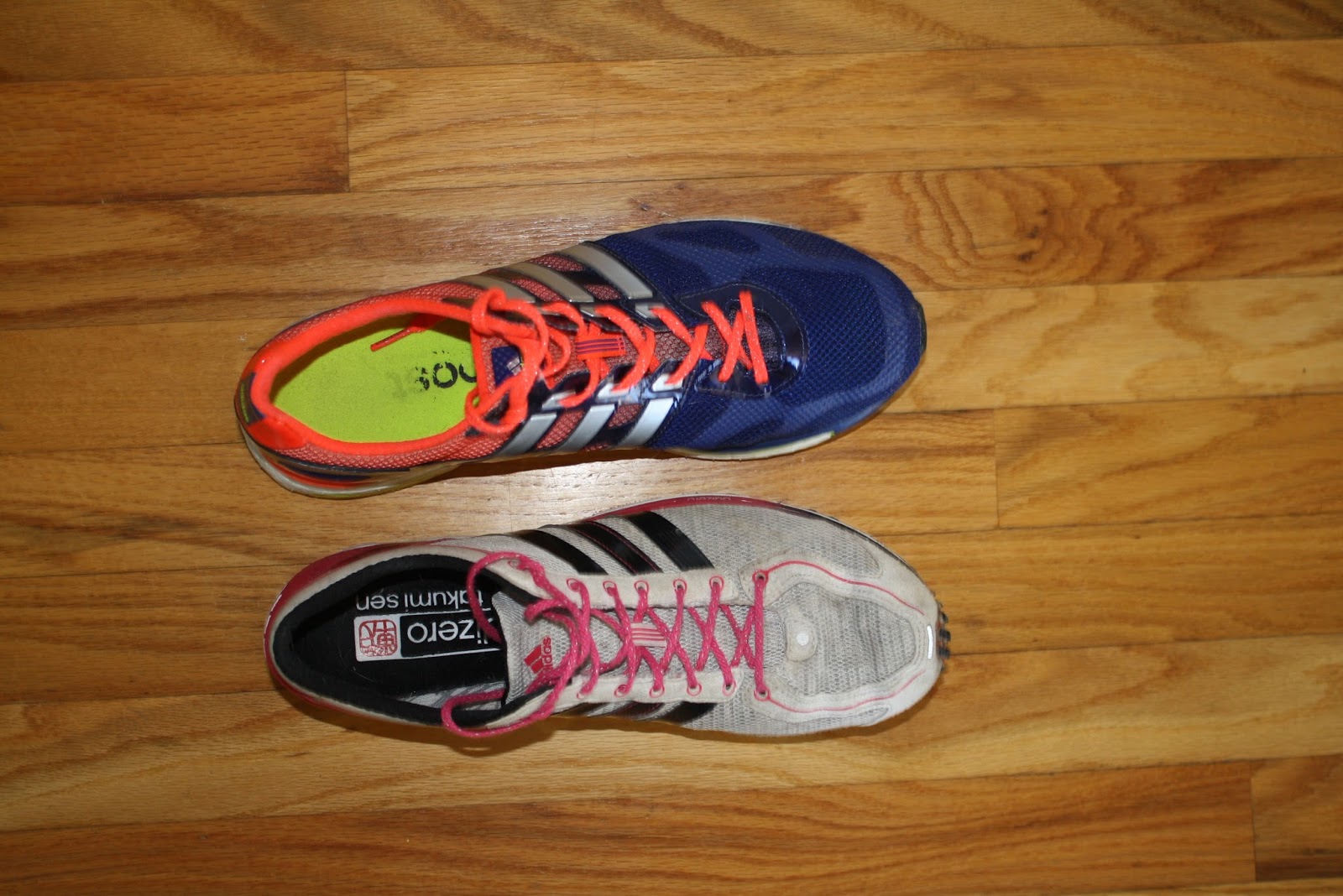 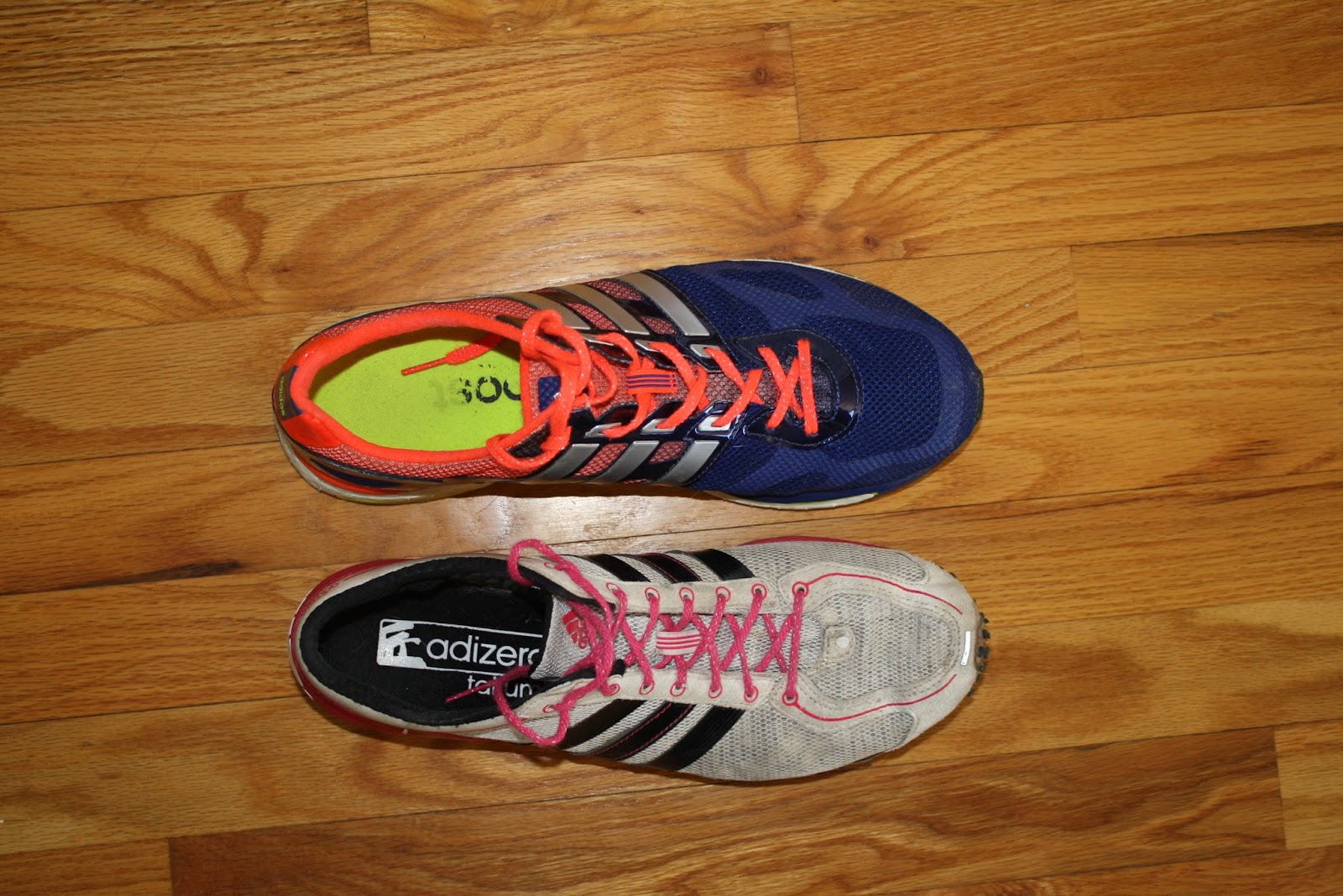 The biggest difference for me, however, was the softness of the cushioning. The foam is considerably softer than any other shoe I have worn, and makes the shoe feel much more like a trainer than a racing flat. I typically prefer a firmer racing shoe, so I was worried that this shoe would not be responsive enough and feel slow.

I took the shoes out for a quick 3-mile run one day, and was surprised to note that while the shoes were soft, they did not feel nearly as squishy and spongy as I expected. Part of it might have been the temperature, as it was roughly 10 degrees with a strong wind, but the shoes definitely firmed up while I was running. It could also be that I don’t land on my heel, where the Boost material is thickest. Despite having a fairly significant heel-toe offset (10mm), I did not feel like the shoe was bulky or encouraging me to heel strike, and the transition from landing to toe-off felt smooth and stable. 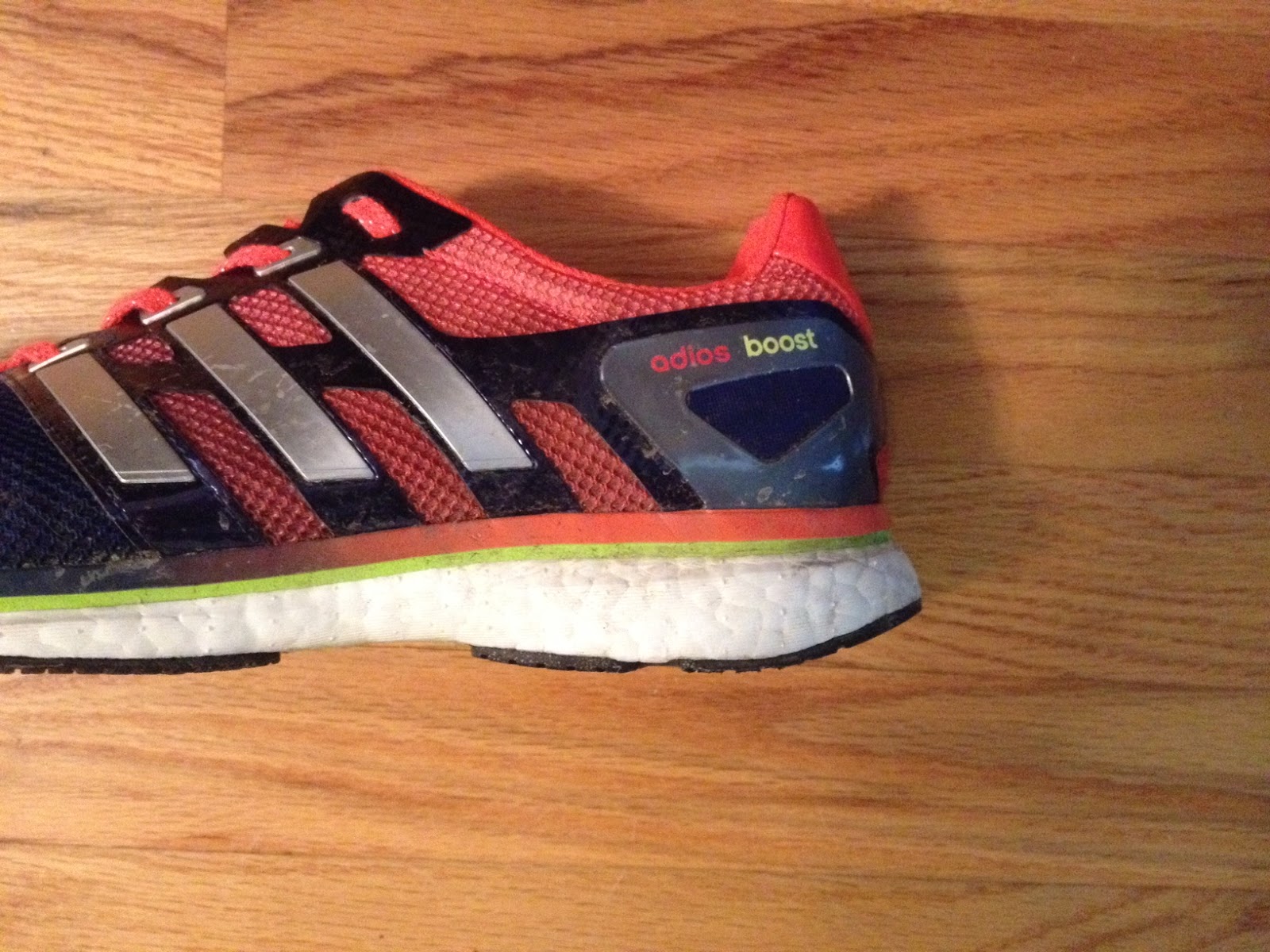 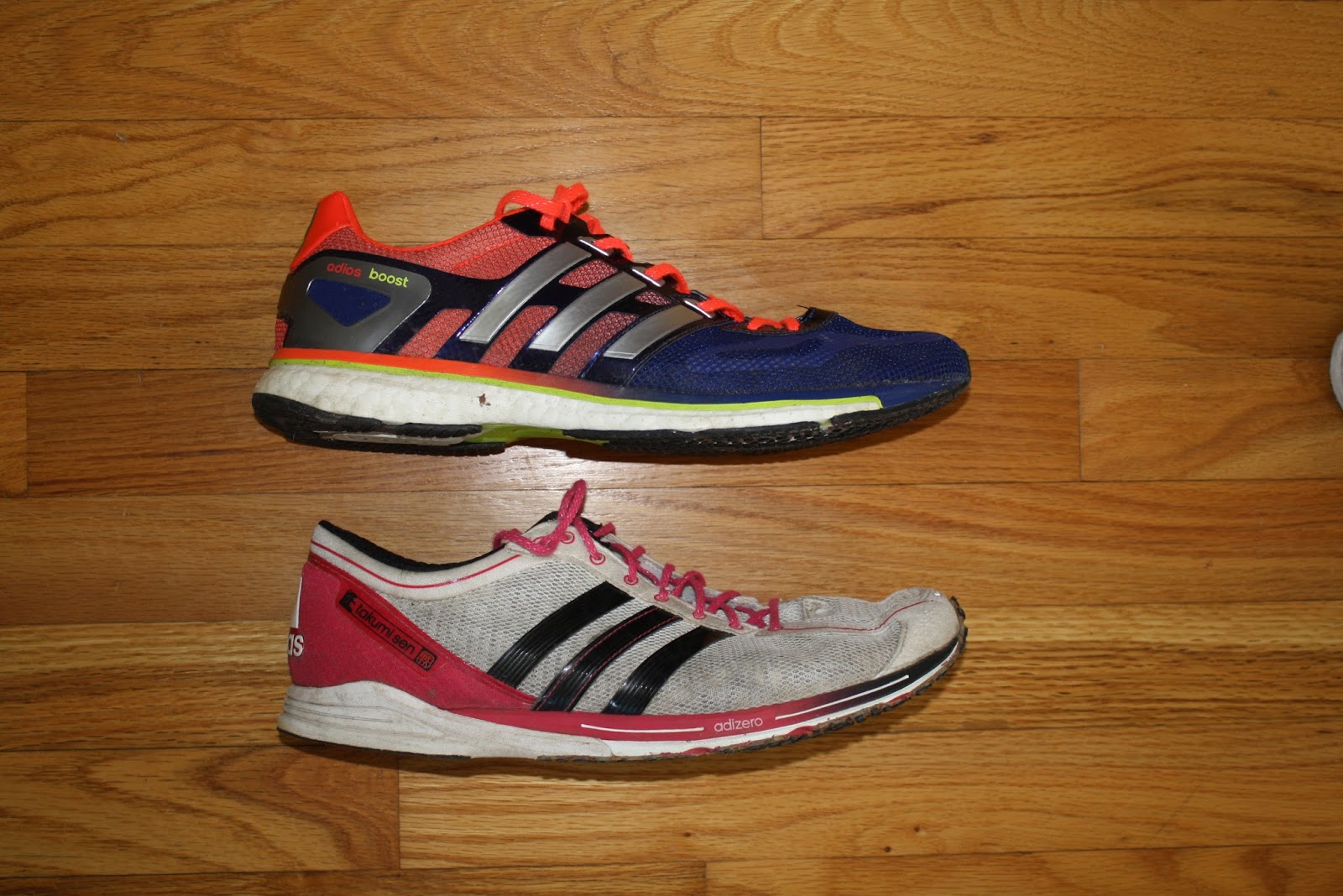 In the next month, I ran an 8-mile and a 10K road race with these shoes, as well as several workouts. Despite feeling very squishy while walking around them, they do feel very responsive and fast while running hard. I can already tell that I prefer them to the Takumi Sens, not only for the wider toebox, but for the additional cushioning as well. The forefoot especially feels much softer and more forgiving, which is appreciated on longer races or on cooldowns if I don’t switch back into trainers. Also, the fit feels a bit more secure to me, perhaps due to the placement of the lace eyelets.

These shoes have the same type of outsole as the Takumi Sen, which incorporates tiny lugs that are supposed to grip the road better. I typically do not enjoy these, but they work well on both of these flats and aren’t any louder than a typical blown rubber outsole. I can attest that despite racing in western New York wintry conditions, I did not slip a single time while wearing these shoes. Of course, I would not recommend them for running through actual snow; I would still prefer a trail shoe then, but they worked well when the roads were mostly clear with some residual snow and slush. 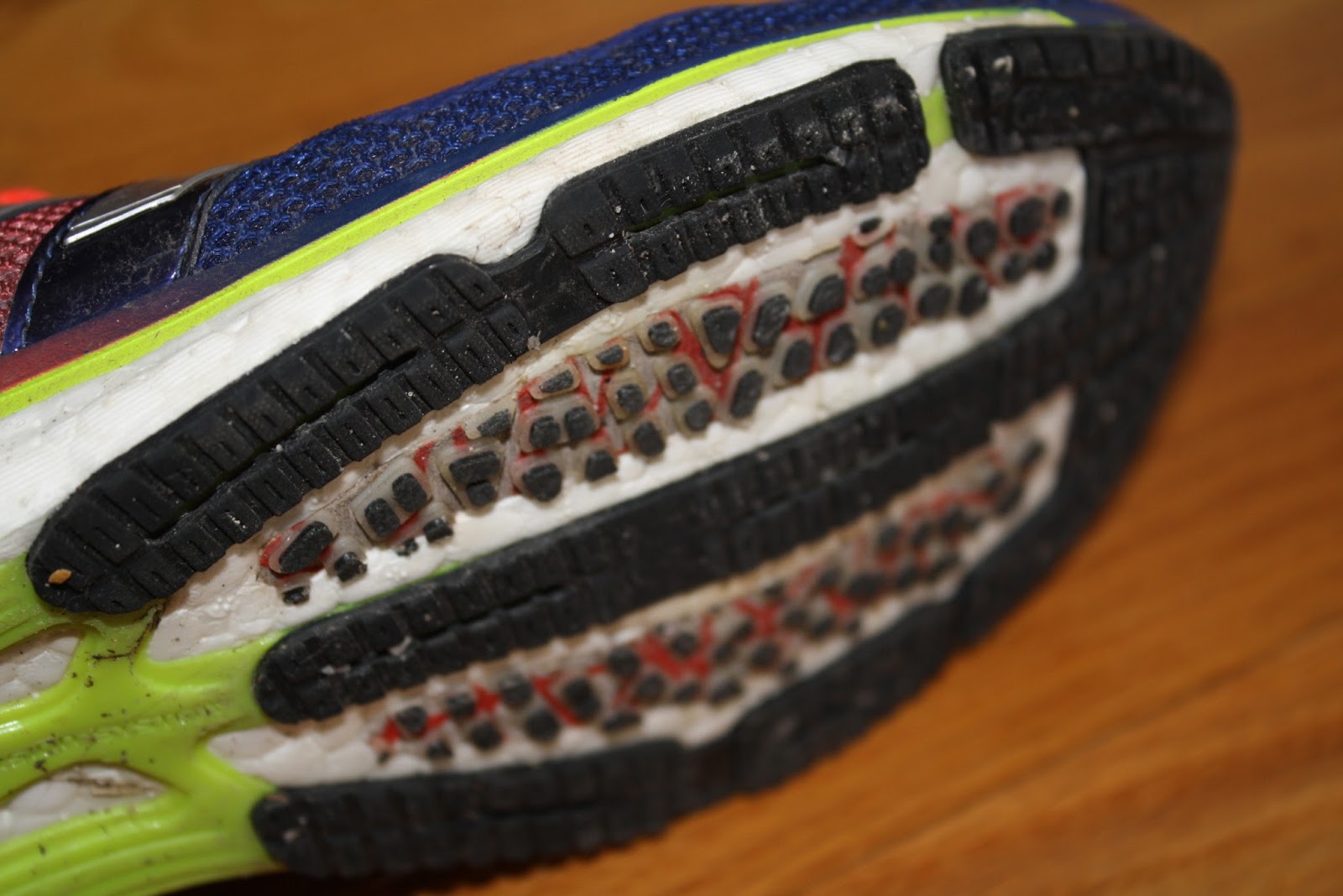 There is also a hard plastic truss, visible as a bright yellowish-green in the above photo, that is supposed to provide some support and firmness to the shoe. Again, I can either take or leave these things. I’ve never had a problem with a shoe being too flexible, but if you do like a less flexible shoe, this is probably a good thing. I suppose it might make the shoe a bit more responsive and help the toe-off, but honestly, I can’t tell when a shoe has one or not (except for the Saucony Sinister, which had a plastic plate that run almost the whole length of the shoe; that I could feel).

All in all, I feel like this shoe is a slightly heavier, much more cushioned version of the Takumi Sen. If you are a little bigger or just prefer additional cushioning, this shoe delivers. It still feels light and fast, but isn’t quite as firm or give you that “feel the road” sensation of the Takumi Sens. I imagine most people will use the Takumi Sens for shorter races, maybe 10K or half marathons, and the Adios Boosts for halves to full marathons. As for myself, I will be wearing these at the Colfax Marathon in May, and will note how they worked for me there. Thanks for reading!